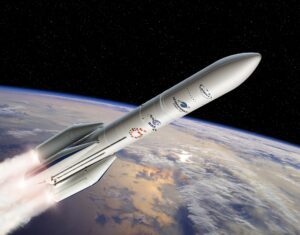 Illustration of Ariane 6 in flight. The project is going ahead as planned. Credit: ESA
Edinburgh, 4 March 2022. – Arianespace is strictly abiding by the sanctions decided by the international community (EU, USA and UK) following Russia’s invasion of Ukraine, the company said.

The operation of the Soyuz launcher from Europe’s Spaceport, French Guiana and from Baikonur, Kazakhstan through Starsem have been governed by the France-Russia inter-governmental, and the ESA–Roscosmos agreement.

The cooperation began after the Soviet Union ended and has been very successful up until now. Roscosmos recently decided to withdraw from Europe’s Spaceport and suspend all Soyuz launches from there. Soyuz launchers and Galileo satellites prepared for launch are in stable configuration and are secure. The OneWeb launch from Baikonur, however, has been postponed due to conditions posed by Roscosmos. Arianespace will strive to ensure the welfare of the payload and equipment currently in Baikonur.

Preparations for the upcoming Ariane 5 and Vega C campaigns of 2022 are going to plan and are on schedule. The Ariane 6 and Vega C projects are also going ahead as planned.